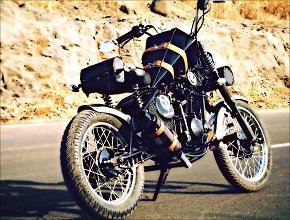 The concern over the environment with respect to pollution, conservation of fuel resources in the world, the automotive industry has entered into a new dimension in production of more fuel efficient, low emission vehicles and new technologies. One of the greatest innovations is Hybrid Electric Vehicle (HEV). The hybrid electric vehicle consists of two or more energy sources for total propulsion of the vehicle. In this paper, two independent propulsions, ICE and electric motor are independently operated for combined effort derivation in total propulsion of the vehicle. The Combined effort of ICE and Electric motor in propelling the vehicle more suitable for country like India is being analyzed in this concept .

TWHV is a vehicle that uses two sources of power- gasoline and battery. For low power application battery drive is used whereas for high power application where power requirement is very high gasoline engine is used. Gasoline drive is most efficient at high speed drive. Thus TWHV’s both mode of operation occurs at their maximum efficiency. But in gasoline engine low speed operation is not efficient. Its high speed mode is only efficient. Therefore, it gives twice the mileage given by a normal vehicle. As this hybrid vehicle emits 50% less emission than normal vehicle it plays an important role for reducing pollution to certain extent without compromising with efficiency. Thus it is most efficient in urban areas mainly in high traffic where gasoline engines are least efficient as the energy from gasoline is being wasted away and creates pollution.